In an effort to become more Pinterest-ing, I wanted to post pictures of my son's Lego birthday party.  I scavenged the web for months gathering ideas.  This was the result: 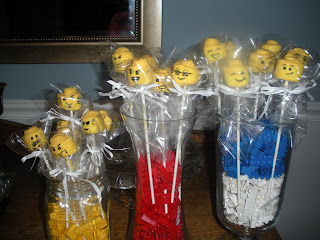 Lego Head Pops turned out great! I took marshmallows and cut off the top 1/4. I then used an icing tip to cut a smaller circle out of the small part of the marsmallow and stuck it back on the big marshmallow for the lego head nubbin. I put the marshmallows on sticks and dipped them in yellow candy melts. I then stuck the pops into a styrofoam cube to harden. Faces were painted on using a small artists brush and a jar of black gel icing. 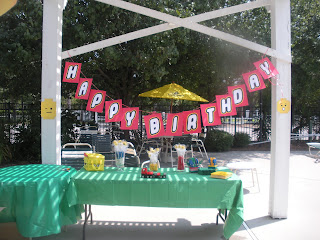 The Lego Banner was pretty awesome. I downloaded a Lego font, printed the letters on white cardstock, glued them onto red cardstock and traced around the letters with a yellow marker to make it look like an authentic Lego logo!  ﻿ 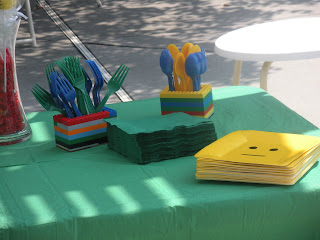 The plates were just the cheap yellow luncheon plates from party city. I took a permanant marker and drew individual faces on them to make them look like lego heads. (Yes, each plate had a different face. I am such a freak.) I didn't get around to adding a nubbin, but no one seemed to notice.﻿ 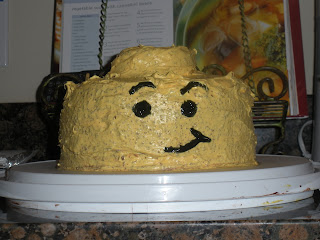 My lego head cake was a different story. I was going to do cupcakes with the Lego candy on top (which I ordered from Amazon). However, I saw people who had made lego head cakes online and thought i could do it (without a trial run, I might add). I used normal cake mix (2 boxes), 3 9 inch pans and a 4 inch pan. When I got the 9 inch cakes leveled and stacked, the dimensions for the nubbin weren't quite right, so I had to shave down my cake. I colored buttercream frosting with yellow food coloring until it was Lego-ish. I did the face with cookie icing. It would have been okay had I known I was supposed to put a thin layer of icing on to catch the crumbs before putting on the final layer. Hubby said it looked like my Lego man had a 5 o'clock shadow on his entire head. 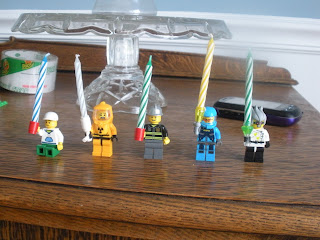 The candle holders were some Lego men with their little Lego cups and things. Perfect size for the candles.
In an effort to pander to my small audience, here are some pictures of the actual party. 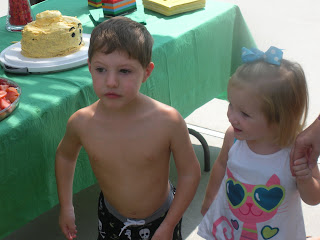 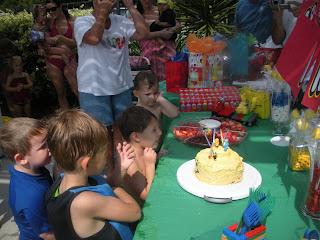 Papa Squat
I am quite delightful.